It was a probably a bad idea in the first place for Ned “Buck” Tyler to flip off the impatient biker  trying to get around his shiny Airstream trailer with the “Buckeye Buck” banner on the gravel road leading from Gator Lake in central Florida.

The finger from the Ohio State football junkie went up in answer to the biker’s shaking fist as the speeding motorcycle approached the diver’s side window of Ned’s scarlet and gray Suburban, en route to the OSU-Florida game in Gainesville after an overnight stop to buy booze, sex and some alligator meat. Ned didn’t actually intend to run the biker off the road, but he lost control a bit on the loose gravel 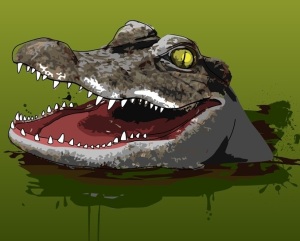 with only one hand on the wheel and drifted over enough to push the biker onto the soft shoulder and subsequently off the road and into a swamp water bath.

“Whoa, sorry there, pal,” Tyler uttered, although not sorry enough to stop, or even slow down. “That’s what you get for messin’ with the Buck.”

Buck Tyler always had an inflated image of himself ever since playing sousaphone in the OSU matching band and, more than once, getting to dot the “i” in the band’s script OHIO halftime maneuver. An insufferable Buckeye booster ever since, he bought the Airstream to supply home luxury at every OSU road football game he could get to, pulling into tailgate areas on Friday afternoons and usually staying until they threw him out on Sunday night or Monday morning.

He hit Gainesville right on schedule and made himself at home, cranking up the OSU fight song to play incessantly and setting up Lois, his bodacious Buckeye mannequin cheerleader with the nicest pompoms you ever saw, outside the trailer door. He then started to grill gator steaks, drink heavily and swap barbs with all the Florida fans within shouting distance, promising everyone a sound thrashing on game day.

The Gator baiting went on past midnight, when a drunken Buck finally retired for the night, unaware of the swamp-stinky figure that strolled into the tailgate area looking for the Airstream with the Buckeye Buck banner. Next morning,  when security was called to determine what had happened, funny how nobody had seen or heard anything.

They found the Suburban inoperable from a half-rotten gator snout stuffed into the tailpipe. Lois lay headless, armless and topless, wearing only a pair of men’s UF swim trunks with a cucumber stuffed inside the front, while her head, arms, cheer suit and pompoms smoldered nearby next to a half-can of kerosene.

There was a gaping hole in the back of the trailer, where someone appeared to have cut through with a chain saw, but there was no sign of Buckeye Buck.

“Hmmm,” the security chief muttered as he surveyed the damages. “Fella must’ve gone a little overboard with his partying last night. Gonna have to write him up for that open fire!”

(Note: This was written as a Writers Kickstart prompt containing the following elements: an Airstream trailer with back ripped off, a sousaphone, a rotten alligator snout, a half-can of kerosene and a headless, armless female mannequin in men’s swim trunks.)

One response to “Gator Baiter”